By Spicy Sugar
March 17, 2011Bangs GarciaIwa MotoJodi Sta Marianews
Kapuso talent Iwa Moto cleared Kapamilya artists Bangs Garcia ang Jodi Sta. Maria as the purported 3rd party that caused her to take a cool-off with boyfriend Mickey Ablan. Iwa reportedly told reporters that she does not know Jodi Sta. Maria personally because she never got the chance to work with her. 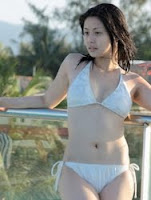 Iwa denied any knowledge of the issue that came out about Jodi and why the latter was pinpointed as the alleged 3rd party.

Aside from Jodi, Bangs Garcia's name was also dragged into the controversy but Iwa clarified that she knows Bangs more than anyone else as she is her bestfriend.

Iwa revealed that Bangs got affected and pleaded that the issue involving her be stopped once and for all.

Iwa happily said that she and Mickey are back in each others arms after the latter asked for forgiveness and courted her back.