Apple to unveil iPad 2 on March 2

By Unknown
February 24, 2011appleeventsiPad 2newstech news
If you're planning a buy an iPad this month, hold on. It will be a good idea if you postpone your purchase a little longer. Why? It's because Apple is expected to unveil the second generation of their successful tablet computer, which with much anticipation will come with better, greater hardware as well as software upgrades.

Yes, the company already sent invites to press people in the states for an event that will take place in San Francisco on March 2. 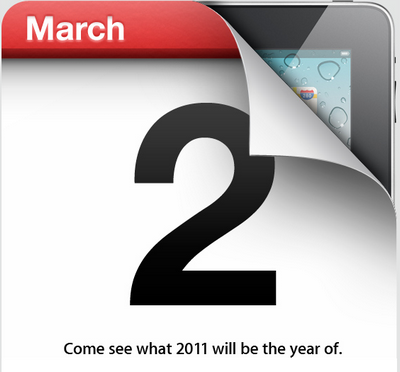 After that, count two to three more months for the actual device to be released and shipped.

What to expect? Mobile news blog MobileCrunch has listed down some of the expected iPad 2 specs and features, as follows:
If available, a video of the iPad 2 event will be embeded here starting next Wednesday (Thursday in the Philippines).

We got an UPDATE, check it out on this page.