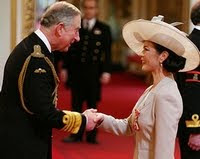 Zeta Jones, 41, told international media organizations that she was “very emotional and rather nervous” to receive the honor, which, according to the Associated Press was given for her services to the film industry and her charity efforts.

When the award was announced last year, the actress reportedly said she was “absolutely thrilled.” Zeta Jones told the media that receiving the CBE as “very personal.”

“As a British subject I feel incredibly proud. At the same time it is overwhelming and humbling,” Zeta Jones reportedly said.