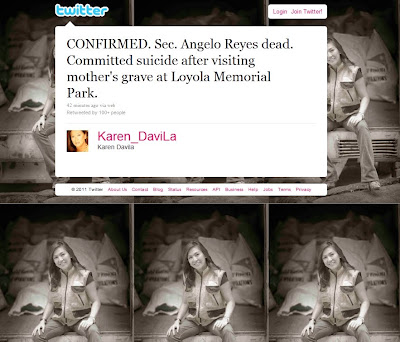 Reports said that secretary Reyes was brought to the Quirino Memorial Medical Center in Quezon City at 7:45 am for a gunshot wound on the left side of his chest; the doctors tried to revive him for 45 minutes but received no response.

Reyes' lawyer Atty. Bonifacio Alentajan, however, reportedly said that he does not think his client would commit suicide.

The police Scene of the Crime Operatives (SOCO), according to reports, are now investigating the scene if there was foul play.

Journalist Ellen Tordesillas in a blog post revealed that “according to the memorial park caretaker, Reyes with his aide and four members of his family arrived past 7 a.m. at the grave of late secretary’s parents – Pablo and Purificacion Reyes. The day before, the caretaker said Reyes was also there.”

“DZMM showed a blood-splattered tombstone of Reyes’ mother. Also found where Reyes’ fell was a pocketbook, “The Art of the Deal” by Donald Trump. Towards the visit, when his companions were walking towards their vehicle, the park caretaker said, Reyes asked for private moments in front of his mother’s grave. He saw Reyes sitting. Then he heard a deafening gunshot. Police recovered an empty shell of a .45 calibre pistol,” Tordesillas wrote.