By Unknown
January 12, 2011Apple iPhoneCDMA iPhone 4tech newsVerizon iPhone 4
It's official. Verizon on Tuesday, January 11, has launched the iPhone 4 during a press conference in New York. You may ask, “I've seen the iPhone, I even own one, so what's the big deal?” The Verizon iPhone 4 is different; has features that are uniquely available on Verizon.

photo © 2010 jfingas | more info (via: Wylio)
We've gathered salient points from reports of our friends at TechCrunch who covered the iPhone 4 Verizon edition launch. Here are the details:
In the Philippines, Globe Telecom is the exclusive carrier of Apple's iPhone 4. Will the company offer a version similar to that of Verizon's? 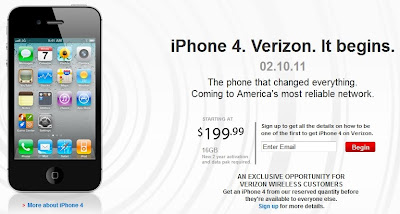