By Unknown
January 24, 2011DOSTnews
The Department of Science and Technology (DOST) through secretary Mario Montejo late last week announced that the science department is preparing hazard warning devices to be deployed in identified landslide prone-areas all over the country.

With these landslide warning systems, “people can prepare themselves better and faster,” Science Secretary Mario Montejo said during a post-landslide inspection Saturday at St. Bernard, a Southern Leyte town which was declared a permanent danger zone following a series of landslides that left three children dead and a number of houses buried in mud. 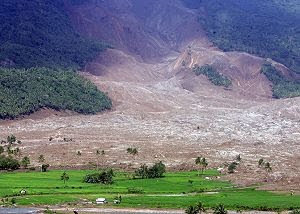 He added that it will not only benefit St. Bernard but the whole of Leyte and other areas prone to landslides.

The DOST is expected to roll out the landslide warning system within the year.