By Unknown
January 20, 2011news
Samuel Belknap III, a graduate research assistant working under the direction of Kristin Sobolik in UMaine’s Department of Anthropology and Climate Change Institute, found a 9,400-year-old skull fragment of a domestic dog during analysis of an intact human paleofecal sample. 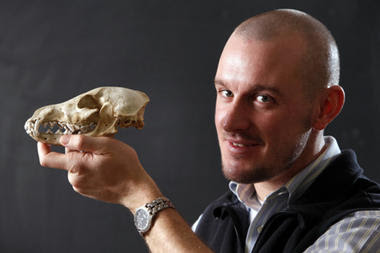 Photo from CSMonitor.com
The fact that the bone was found in human waste provides the earliest proof that humans in the New World used domesticated dogs as food sources.

“This is an important scientific discovery that can tell us not only a lot about the genetic history of dogs but of the interactions between humans and dogs in the past,” said Belknap. “Not only were they most likely companions as they are today, they served as protection, hunting assistants, and also as a food source.”

Belknap’s discovery will first be documented in the American Journal of Physical Anthropology as well as other scientific journals.

“I didn’t start out looking for the oldest dog in the New World,” Belknap said. “I started out trying to understand human diet in southwest Texas. It so happens that this person who lived 9,400 years ago was eating dog.”

He discovered the bone, known as BE-20, during the 2009-2010 academic school year while examining a paleofecal sample recovered in the 1970s from Hinds Cave, a major archeological site in southwest Texas near the Mexico border.

Sourced from The University of Maine