By Unknown
December 01, 2010PromosSmart Buddy
Right now, Facebook users who `liked´ Smart's fan page are into a guessing game. Everybody's wondering what the letters “LC” under the “Be The First” tab mean and what this new Smart Buddy promo where registrants get tokens is all about. 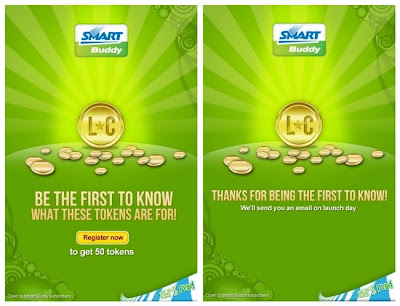 I've spoken to a social media enthusiast (SME) who made a non-scientific analysis (in other words, a `wild guess´) for this upcoming promo from Smart.

SME confidently said that “LC probably means Load Credits.” “It appears that Smart Buddy will be releasing a new Facebook app which can be used by subscribers to get load credits for something fun, and for a chance to win cool gadgets and other prizes,” SME predicted.

We will leave it that way.

On launch day we will find out if SME's personal forecast would come true anyway. For now, we'll need to register to “Be The First” to know.