By Unknown
December 24, 2010Christmas 2010Idaho State Player’s Foul Shot Gets Stuck On Front Rim
Basketball fans were watching Tuesday night's game between Idaho State and Utah State when a bizarre thing happened late at the second half. The foul shot of Idaho's Kamil Gawrzydek “bounces high off the back rim, deadens on the front rim and remains stationary there for almost two seconds before finally falling through the hoop.”


How did that crazy foul shot nearly defy the law of physics? John Fontanella, a physics professor at the U.S. Naval Academy, “suggested a sticky substance on the ball or an air conditioning vent blowing straight down on the rim could have contributed” for the ball to get stucked [source].

We may never can see a foul shot like that again in many, many years. Truly one in a million. Here's a photo of the miracle foul shot (we adjusted the photo's brightness and contrast levels). 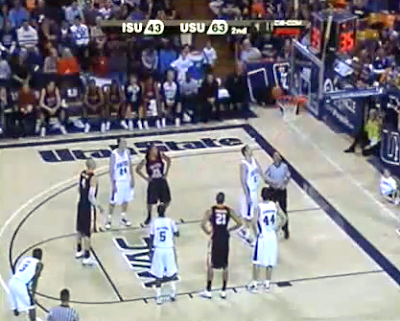