By Unknown
November 19, 2010social networkingtech newstwitteryahooZynga
Yahoo gets even more personal and entertaining with the integration of social and local feature updates. These include Twitter and Zynga rolled out across Yahoo, not to mention Yahoo! Messenger Beta that allows users to play social games and share statuses in social networks within the client.

"Our job is to connect you with the people, places and things that matter most to you — whether that's making a restaurant reservation, finding a discounted tee time, or playing popular online games with friends," said Yahoo! executive vice president and chief product officer Blake Irvingi in a press release published recently.

"By enhancing Yahoo!'s most popular sites and services with social experiences like Zynga and Twitter, great local content, and a new platform for sharing your voice with the world, we're making Yahoo! an even better place for everyone to stay entertained, productive, and informed," Irvingi added.

Among other updates and enhancements, the following were rolled out on a global scale:
The first wave of updates are pretty rich, but there could be a lot more in the coming months.

We're excited for the day to come when the most popular Zynga game FarmVille and the most anticipated CityVille get playable using the YM or toolbar. 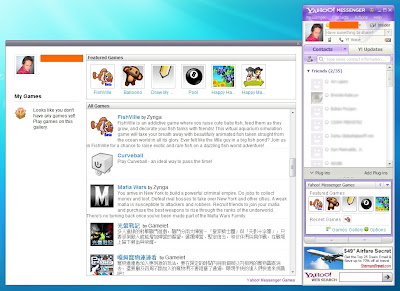