Pilipinas Kay Ganda! (So Beautiful!) - DOT website gets a facelift

By Unknown
November 15, 2010DOTPhilippinesPilipinas Kay Gandatech newswebsite launch
The Department of Tourism has a new homepage! Just in time for the launch of its new tourism slogan “Pilipinas Kay Ganda” (“Philippines...So Beautiful”), the DOT on Monday also gave its official website a makeover.

It can be accessed at www.beautifulpilipinas.com from your browser. 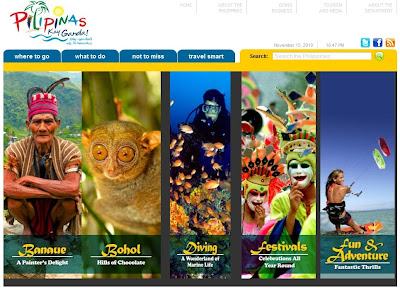 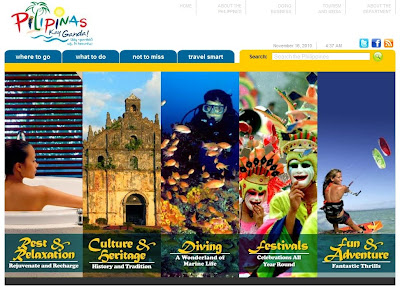 DOT Gives Industry a Preview of Brand PH: Tagline harps on country’s beauty, Filipino hospitality
November 16, 2010 press release prepared by the Department of Tourism
The Department of Tourism unveiled last night the new Philippine tourism brand that focused on the beauty of the country and the warmth of its people.

DOT Secretary Alberto A. Lim cited the new Philippine tourism brand as reflective of the hope and optimism being represented by the new administration.

Before unveiling the brand concept and design, Lim clarified before the members of the tourism industry that this emerging centerpiece of the country’s marketing campaign was a still a work in progress since their inputs would be considered to strengthen it.

“It (industry’s input) is in keeping up with the President’s philosophy of public-private partnership,” Lim stressed.
He revealed, though, that the brand concept had been presented to others and elicited mixed reactions because of its “radical departure from what our neighbors are doing.”

Nonetheless, Lim said that the new concept adhered to the criteria of Simon Anholt, foremost authority on Nation Branding, that positioning a country’s brand should highlight attributes differentiating it from other nations while being relevant, distinctive and believable.

The new brand carries both visual and verbal idioms of how beautiful the Philippines is through the tagline “Pilipinas Kay Ganda” and a colorful logo that incorporates the coconut tree, sun and tarsier to depict the country’s unique tropical beauty and its people’s sunny disposition.

However, Lim admitted that the brand might encounter stiff resistance as experienced by Singapore in 2007 when it first planned to change its image from a mere business hub to a leisure destination.

“Singapore launched its new brand early this year. And already, they have achieved their arrival target for the year as early as October,” Lim pointed out, citing the opening of its theme park and casinos that made the change in image imperative.
“When they expanded their market to include the leisure traveler, they needed to project a new Singapore. The idea of a ‘work and play’ destination was certainly relevant to this new market. The casinos and theme park made it believable. And once again, Singapore can lay claim to that distinctive brand,” Lim explained.

But the greatest challenge, according to Lim, is how to make the Philippines attain a competitive identity that differentiates it from “what our neighbors are claiming to be…, or what can we really say that will make us more than just another Asian destination?”

“We need to be more daring in expressing our brand, if we are to rise above the clutter,” Lim further stressed in ruling out the option of just rehashing the country’s 8-year-old Wow Philippines positioning line.
“Besides, a new brand always generates a buzz that translates to more media mileage for the same promotional budget,” Lim added.

The brand preview, held at the Oceana near the Mall of Asia, was graced by members of the various sectors of the tourism industry led by Lim and DOT Undersecretary for Planning and Promotions Vicente Romano III.

“While every country is trying to own an English word or phrase as a brand description to promote itself, we are using our own native name and the local vernacular to express our national pride and tell our story in our own way to make it rise above the competition,” Romano explained.

“This new brand addresses the two topmost considerations of tourists all over the world in their choice of destination – the beautiful scenery and the warmth of the people,” Romano said during his powerpoint presentation outlining the market surveys used as basis for the design concept.

“At the same time, we are using the vernacular for the tagline to radically enhance the brand’s Filipino character, whose hospitality is known the world over. Thus, every domestic and foreign tourist will tend to mouth the phrase ‘Pilipinas Kay Ganda’ in the same fashion that Hawaii has successfully popularized the expression ‘Aloha’ on a global scale,” Romano said.
To Lim, however, any brand concept — no matter how relevant, distinctive and believable it might be – if not supported by the people, could go the way of UK’s “Cool Brittania” that was declared dead after four years.

“That’s why I’d like to invite all of you to join hands and rally behind the brand we are about to reveal. Together, let’s make the brand not only believable, but also real. After all, no one can argue that our motherland is beautiful. And it’s the only one we have,” Lim concluded in his speech.

The brand, according to Romano, “may still go through some refinements based on the feedbacks from market testing and FGDs (Focus Group Discussions)” that will follow.

“Brand activation programs and advertising campaigns will then be developed and begin to roll out by late January or early February of next year,” Romano added.