By Unknown
November 23, 2010ABS-CBNPilipinas Got TalentReality Showtalent search
The second season of Pilipinas Got Talent — the most-anticipated reality-talent search show in the Philippines — is expected to start airing in February 2011 on the Kapamilya network. Once more, Filipino singers, dancers, comedians and other performers will show their talent and compete against each other for the judges’ approval and audience support. 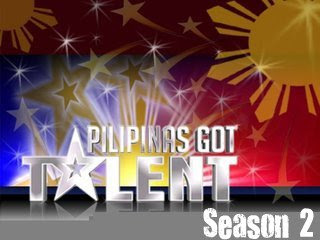 Pilipinas Got Talent Season 2 will be hosted by Luis Manzano and Billy Crawford and to be directed by Bobet Vidanes.

The judges have not been announced yet but the trio of former ABS-CBN president Freddie M. Garcia (FMG), actress/TV host Kris Aquino and actress/comedienne Ai-ai delas Alas most likely will return.

Who's going to follow the footsteps of PGT season 1 grand champion Jovit Baldovino? We will find out beginning February 2011!