By Spicy Sugar
November 19, 2010ABS-CBNBandilaCes DrilonJulius BabaoKaren Davila
Hi guys, it's Sugar here. Have you heard the latest news about Julius Babao and Karen Davila who were replaced by Kabayang Noli and Korina during the TV Patrol revamp? And what happened to the earlier rumor about Karen moving to rising network TV5? 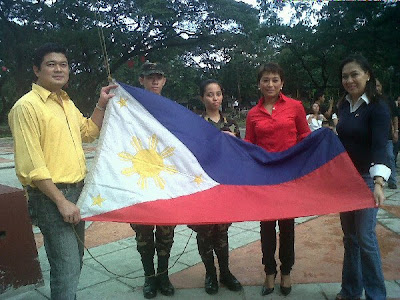 Photo credit: Ces Oreña-Drilon via Plixi
Sources close to ABS-CBN insiders said that the rumor isn't true. And yes, the confirmation that none of both will be getting out of ABS-CBN has come today.

ABS-CBN Corporate Communications on Friday published a press release confirming the hot buzz in social networking sites Facebook and Twitter that Julius and Karen will be joining Ces Oreña-Drilon in the late night news program “Bandila.”

We're reposting the PR for further details of this development.

Babao and Davila's addition to the program also marks the dawn of a new and more interactive "Bandila," wherein viewers are given a chance to air their reactions to every news item.

Through the official pages of "Bandila" on Facebook and Twitter, and the three anchors' personal accounts, people may send in their comments while the newscast is going on. After each report, Drilon, Babao, and Davila will read some of the entries live on air.

"Bandila" executive producer Paul Henson said this is another way to empower Filipinos, aside from encouraging them to report to the award-winning "Bayan Mo, iPatrol Mo: Ako ang Simula" citizen journalism campaign.

"We want our viewers to have a platform where they can immediately express themselves, where they feel empowered to take part not just in the discussion but in finding solutions to the issue at hand," he said.

Known as "working journalists," Drilon, Babao, and Davila have established their credibility in the industry with news reports and stories they themselves have pursued, written, and produced.

Drilon has long juggled anchoring and reporting duties from her stint in "The World Tonight" in the early nineties up to the present day as one of the original anchors of "Bandila." People turned to her for information in critical news events such as the Manila Peninsula Siege in 2007, where she was among the few journalists whose lives were put in danger. Drilon is also the anchor of current affairs gems like "Pipol," "The Correspondents," and "I Survived."

Like Ces, Davila is a former anchor of "The Correspondents," the news documentary program that has won her awards from UNICEF Child Rights Awards (2005), Asian TV Awards (2006), and New York TV and Film Festivals (2004 and 2007). Davila was also named Broadcast Journalist of the Year by the Rotary Club of Manila in 2004 and one of the Ten Outstanding Young Men in 2008.

With decades of experience and a bundle of awards among them, Drilon, Babao, and Davila are expected to bring depth and savvy to "Bandila" and also increase viewer participation through their use of social media within the program.

Be part of history as it unfolds. Join Ces Oreña Drilon, Julius Babao, and Karen Davila from Monday to Friday, after "SNN" on "Bandila." Take part in the newscast by sending your comments and reactions to the official Facebook and Twitter pages of "Bandila" and official accounts of the three anchors.

I hope I could catch the November 22nd episode of the program.