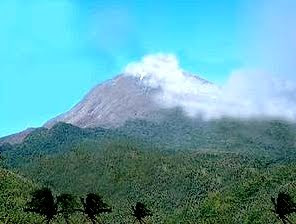 Bulusan Volcano’s (12°46.2’N, 124°03’E) seismic network detected a total of eight (8) volcanic earthquakes during the past 24 hours. The summit of the volcano was most of the time obscured by thick clouds. However, during times of good visibility weak to moderate emission of white steam was observed.

The November 6 and 8, 2010 ash explosions are typical of Bulusan Volcano’s activity during its restive period. PHIVOLCS expects more explosions to occur in view of the volcano’s recent reactivation. Hence, Alert Level 1 is reiterated to reflect the present activity at Bulusan. Areas within 4 kilometers of the summit has been designated a Permanent Danger Zone (PDZ) which means that the public is strongly advised not to venture inside this area because it may be affected by sudden steam explosions.

Meanwhile, the people residing near valleys and streams are also advised to be vigilant against sediment-laden stream flows in the event of heavy and continuous rainfall. Due to the prevailing wind residents located in the northwest and southwest sectors of the volcano are advised to take precautions against ashfalls. Civil aviation authorities must advise pilots to avoid flying close to the volcano’s summit as ejected ash and volcanic fragments from sudden explosions may pose hazards to aircrafts. PHIVOLCS-DOST is closely monitoring Bulusan Volcano’s activity and any new significant development will be immediately posted to all concerned.

Mount Bulusan is one of the most active volcanos in the Philippines, considered as 4th most active after Mayon, Taal and Pinatubo. It has erupted 16 times since 1886.