By Unknown
October 04, 2010Dancing Flight AttendantspersonalsPhilippinesvideosYouTube
Not Cebu Pacific Airlines? The company didn't even care to publicize it on TV, radio or newspaper. It just happened that “someone” at the backseat was able to get his video camera (no clue if it's a mobile phone cam or a video cam) and recorded the FAs dancing the safety instructions demo. 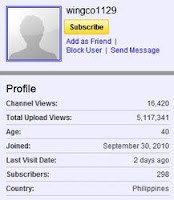 Just like 99% of uploaders on YouTube, the guy uses an alias for his username. His YouTube profile reveals it as “wingco1129,” 40 years old from the Philippines. He joined YouTube on September 30, 2010 and uploaded only one video that's getting 5,117,341 as of the time of this writing. That's amazing.

Three days after, he throws in his second comment: “hey jjasper....thanks reposting my video!!! i already have more than 1.5 million views in less than 2 days!!! it has been picked up by several media already; it has been posted by ryan seacrest and perz hilton in their blogs! amazing response. thanks again for the help! more power to you!”

There something about this guy, really. His username, “wingco1129,” is composed of two words and a set of numbers. Could it be a code? Who is “wingco1129”?

The guessing game stops right there. I will leave it up to ABS-CBN, GMA or TV5 to dig deeper.