By Unknown
September 04, 2010expressionsShowtimetalent searchtelevision showsVice Ganda
Party! Party! is a new expression being popularized by stand up comedian, tv host and commercial endorser Vice Ganda over ABS-CBN Kapamilya's noontime talent search show "Showtime". He is also known to have started the "May Nag-Text" fame which is now adopted by Globe for its SUPERALLTXT 20 promo. 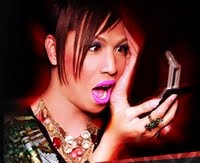 To create a pop expression like "Party! Party!" that influences Filipinos in a major major way =) is another achievement on the part of Vice Ganda.

From now on, expect people to shout "Party! Party!" the Vice Ganda way during live shows, concerts, discos, birthday parties and other events.