Ban on Intextication (texting while driving)

By Unknown
September 26, 2010Anti Driving While TextingbannedIntexticationlawsnewsPhilippine Congress
My first post on `intextication´ was in February of 2009 when concerned groups in the US launched a massive campaign against it, mostly through blogs and email. Just in case you're not familiar with `intextication´, it's an idiom for “texting while driving”.

More than a year after, Buhay party-list representative to the Philippine congress Erwin Tieng has proposed a law that “prohibits drivers from sending text messages” while on the road/driving. 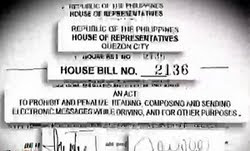 House Bill No. 2136 or HB02136 entitled: “AN ACT TO PROHIBIT AND PENALIZE READING, COMPOSING AND SENDING ELECTRONIC MESSAGES WHILE DRIVING, AND FOR OTHER PURPOSES” authored by Tieng was filed on August 3, 2010 and was referred to the house committee on transportation seven days after.

He said that such anti-texting while driving law will serve as basis for traffic enforcers and police to catch and penalize violators.

As far as we know, there must be prior public consultation before any law is passed, correct? Should you be asked, will you be in favor of the ban on `intextication´?

Please participate in our online poll.

Disclaimer: This blog was not commissioned nor paid by any individual or group to conduct this online poll. This is for educational purposes only.