By Unknown
August 17, 2010GovernmentPresident Noynoy Aquinosocial networkingtech newswebsite launch
Early this month, we broke the news about the president's website getting more social. Indeed on Monday, August 16th, Malacañang launched the new official website of President Benigno Aquino III, which is both informative and interactive.

Malacanang has opened a new interactive website which provides the public updates on the official events of President Benigno S. Aquino III and at the same time serve as a constructive feedback mechanism using the digital media.

Coloma said the first banner statement represents the public’s commitment to follow the new path that the President has set forth while the second statement mirrors the President’s personal commitment expressed during his first State-Of-the-Nation Address (SONA) last July.

“The third banner statement ‘Iba na tayo ngayon, Bagong Pilipinas,’ represents the commitment of our national leadership towards rebuilding trust in government, weeding out corruption, and ushering in a new era in a new culture of good governance,” Coloma said.

Aside from viewing the latest news, photo and video releases, Coloma said the public can now also air their views and concerns using social media links such as Facebook, Twitter, YouTube, Friendster and Multiply which can be acted upon immediately by concerned government agencies. 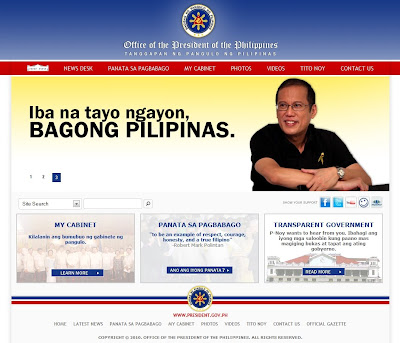 I am happy to announce the launch of the official website of the Office of the President, as part of our commitment to transparency. It is my hope that by means of this website, along with the website of the Official Gazette and other projects that we will launch in the near future, we will be able to continue to engage the citizenry in transforming a government that truly serves the people.