Call Phones from Gmail (How To)

By Unknown
August 26, 2010gmailgooglehow totech news
Google on Wednesday announced that starting August 25th (26th in the Philippines), United States residents can make calls anywhere in the country and to Canada free of charge for "at least the rest of the year". How? Guess what, the free calls from PC to any phone in those countries can be made with Gmail!


The search giant also revealed that "calls to other countries will be billed at very low rates." Calls to the U.K., France, Germany, China, Japan and many more countries, according to Google, will be charged "for as little as $0.02 per minute."

How to call phones from Gmail

It works just like a normal phone. Just click “Call phone” at the top of your chat list and dial a number or enter a contact’s name. 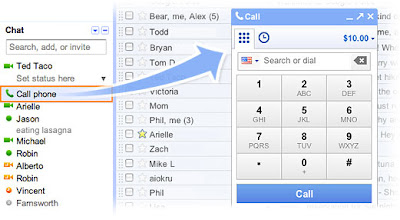 Google is rolling out this feature to U.S. based Gmail users over the next few days. A “Call Phones” tab will appear in your chat list once once it is available in your country.