By Unknown
July 26, 2010newsPresident Noynoy Aquinotech newswebsite
Just as we predicted, the official website of the Office of President Benigno Aquino III has been officially launched in time for his first State of the Nation Address (SONA) today, July 26, 2010. The Official Gazette (www.gov.ph) is now up and running.

The official website of the Office of the President has links to President Aquino's platform of government, speeches, photo gallery and links to government websites at the top tab.

The lower part consists of the latest gazette, subscription box and resources link. 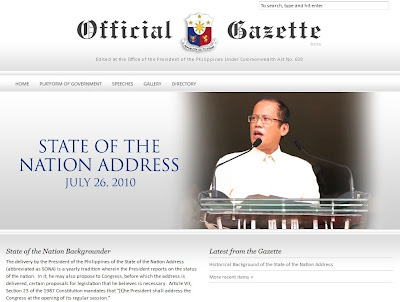