By Admin
July 03, 2010Ninoy AquinopersonalsPresident Noynoy Aquino
Ninoy's letter to Noynoy (Liham ni Ninoy kay Noynoy) was published on the web by blogs and news websites and likewise featured in television programs since 2007. Right now it is one of the most-searched topics on Yahoo! We've decided to repost the letter as we feel it is timely to revisit what is considered to be an important part of Philippine history. 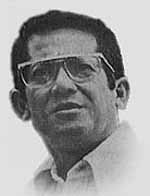 One of these days, when you have completed your studies I am sure you will have the opportunity to visit many countries. And in your travels you will witness a bullfight.

In Spanish bullfighting as you know, a man – the matador – is pitted against an angry bull.

The man goads the bull to extreme anger and madness. Then a moment comes when the bull, maddened, bleeding and covered with darts, feeling his last moment has come, stops rushing about and grimly turns his face on the man with the scarlet “muleta” and sword. The Spaniards call this “the moment of truth.” This is the climax of the bullfight.

This afternoon, I have arrived at my own moment of truth. After a lengthy conference with my lawyers, Senators Jovito R. Salonga and Lorenzo M. Tañada I made a very crucial and vital decision that will surely affect all our lives: mommie’s, your sisters’, yours and all our loved ones as well as mine.

I have decided not to participate in the proceedings of the Military Commission assigned to try the charges filed against me by the army prosecution staff. As you know, I’ve been charged with illegal possession of firearms, violation of RA 1700 otherwise known as the “Anti-Subversion Act” and murder.

You are still too young to grasp the full impact of my decision. Briefly: by not participating in the proceedings, I will not be represented by counsel, the prosecution will present its witnesses without any cross examinations, I will not put up any defense, I will remain passive and quiet through the entire trial and I will merely await the verdict. Inasmuch as it will be a completely one-sided affair, I suppose it is reasonable to expect the maximum penalty will be given to me. I expect to be sentenced to imprisonment the rest of my natural life, or possibly be sent to stand before a firing squad. By adopting the course of action I decided upon this afternoon, I have literally decided to walk into the very jaws of death.

You may ask: why did you do it?

Son, my decision is an act of conscience. It is an act of protest against the structures of injustice that have been imposed upon our hapless countrymen. Futile and puny, as it will surely appear to many, it is my last act of defiance against tyranny and dictatorship.

You are my only son. You carry my name and the name of my father. I have no material wealth to leave you. I never had time to make money while I was in the hire of our people.

For this I am very sorry. I had hopes of building a little nest egg for you. I bought a ranch in Masbate in the hope that after ten or fifteen years, the coconut trees I planted there would be yielding enough to assure you a modest but comfortable existence.

Unfortunately, I had to sell all our properties as I fought battle after political battle as a beleaguered member of the opposition. And after the last battle, I had more obligations than assets.

The only valuable asset I can bequeath to you now is the name you carry. I have tried my best during my years of public service to keep that name untarnished and respected, unmarked by sorry compromises for expediency. I now pass it on to you, as good, I pray, as when my father, your grandfather passed it on to me.

I prepared a statement which I intend to read before the military commission on Monday at the opening of my trial. I hope the commission members will be understanding and kind enough to allow me to read my statement into the record. This may well be my first and only participation in the entire proceedings.

In this statement, I said: Some people suggested that I beg for mercy from the present powers that be. Son, this I cannot do in conscience. I would rather die on my feet with honor, than live on bended knees in shame.

Your great grandfather, Gen. Servilliano Aquino was twice condemned to death by both the Spaniards and the American colonizers. Fortunately, he survived both by a twist of fate.

Your grandfather, my father was also imprisoned by the Americans because he loved his people more than the Americans who colonized us. He was finally vindicated. Our ancestors have shared the pains, the sorrows and the anguish of Mother Filipinas when she was in bondage.

It is a rare privilege for me to join the Motherland in the dark dungeon where she was led back by one of her own sons whom she lavished with love and glory.

I ended my statement thus: I have chosen to follow my conscience and accept the tyrant’s revenge.

It takes little effort to stop a tyrant. I have no doubt in the ultimate victory of right over wrong, of evil over good, in the awakening of the Filipino.

Forgive me for passing unto your young shoulders the great responsibility for our family. I trust you will love your mother and your sisters and lavish them with the care and protection I would have given them.

I was barely fifteen years old when my father died. His death was my most traumatic experience. I loved and hero-worshipped him so much, I wanted to join him in his grave when he passed away. But as in all sorrows, eventually they are washed away by the rains of time.

In the coming years, I hope you will study very hard so that you will have a solid foundation on which to build your future. I may no longer be around to give you my fatherly advice. I have asked many of your uncles to help you along should the need arise and I pray you will have the humility to drink from their fountain of experiences.

Look after your two younger sisters with understanding and affection. Viel and Krissy will need your umbrella of protection for a long time. Krissy is still very young and fate has been most unkind to both of us. Our parting came too soon. Please make up for me. Take care of her as I would have taken care of her with patience and warm affection.

Finally, stand by your mother as she stood beside me through the buffeting winds of crisis and uncertainties firm and resolute and uncowed. I pray to God, you inherit her indomitable spirit and her rare brand of silent courage.

I had hopes of introducing you to my friends, showing you the world and guide you through the maze of survival. I am afraid, you will now have to go it alone without your guide.

The only advice I can give you: Live with honor and follow your conscience.

Son, the ball is now in your hands.

Notice the last phrase: "Son, the ball is now in your hands." Truly timely, despite the letter being written 37 years ago.