By Unknown
June 21, 2010farmvillefarmville botFrontierVilleFrontierVille Cheatssocial gamessocial networkingZynga
Social gaming giant Zynga has added a new vehicle to its popular Facebook game FarmVille. The FarmVille Biplane was unveiled recently. It's a classic airplane that players can use to fly over theirs or a neighbor's farm for instant crop growth. 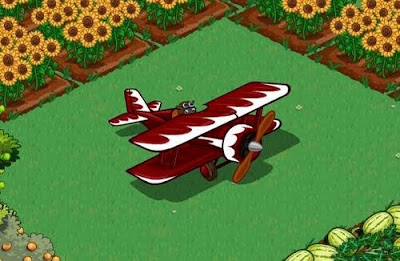 FarmVille Biplane, which enables players to level up faster or help friends in co-op missions, is now available at the market 'Vehicle' tab for 30,000 FarmVille coins although the first use is free. The Biplane is unlocked at level 12.

How to use FarmVille Biplane Instant Grow capability:
Also, just in case you don't know yet, Zynga has made the FarmVille buildings rotatable. The move was inspired by the overwhelming launch success of its latest game that first allowed building rotation, FrontierVille.