By Unknown
May 19, 2010celebrity scandalMiss USA ScandalMojo in the MorningRima Fakih ControveryStripper 101TMZ
Just days after she was crowned Miss USA 2010, Arab-American Rima Fakih of Michigan is in the hot media spotlight after TMZ featured her "Stripper 101" photos. Videos of the Rima Fakih stripper pole dancing controversy also surfaced at YouTube.

According to sources, Rima Fakih won as champion of the "Stripper 101" pole dancing competition for local Detroit radio morning show Mojo in the Morning three years ago, or in 2007. 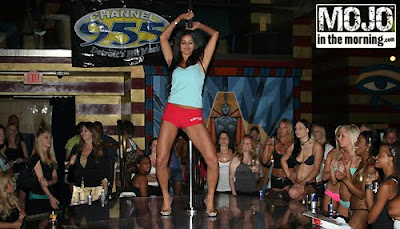 Photo from Mojo in the Morning
Will this controversy 'strip' Miss USA Rima Fakih her crown?

Mojo In The Morning producers have been contacted by representatives of Miss Universe requesting more photographs and information regarding Miss USA Rimah Fakih's involvement in the "Stripper 101" contest. When asked if Fakih's status as Miss USA was in danger, pageant representatives would not answer.

Morning show host Mojo says the controversial photographs were taken from our website where they have been posted for three years. He said Mojo In The Morning will not release any further photographs and hopes that Donald Trump does not ask Fakih to relinquish her crown. "It would be foolish to consider anyone other than Rima to represent the USA. The photos taken from our website are no more provocative than those on the Miss USA website." ~ Foxnews.com