By Unknown
May 11, 2010boxingfloyd mayweathermanny pacquiaonewspoliticssports
World Boxing Organization (WBO) welterweight champ Manny "Pacman" Pacquiao is set to earn another title, this time in the political ring. The latest partial unofficial result of the congressional election in the Sarangani province shows Pacquiao is leading by a wide margin. 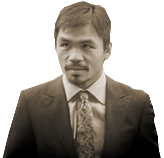 As of 7:00 p.m. on Tuesday, the partial unofficial results with over 84% of election returns in a quick count tally at the GMA news web portal indicated 98,951 votes were obtained by Pacquiao as against his rival Roy Chiongbian with 49,442.

Meanwhile, top boxing promoter Bob Arum, according to sources, said that he will try to convince Pacquiao to fight Floyd Mayweather Jr. even if he wins a congressional seat.

He proposes that the match be slated in November. Arum told ABS-CBN news that he hoped to introduce the Philippine boxer as "Congressman Manny Pacquiao" during his next match.