By Unknown
April 02, 2010googletech newsTopeka
On April 1st, Google has decided to change its company name to Topeka in honor of the Kansas municipality which changed its name to Google. Coincidence? No. Here's the official statement of Eric Schmidt, Chairman and Chief Executive Officer, Topeka Inc.

Early last month the mayor of Topeka, Kansas stunned the world by announcing that his city was changing its name to Google. We’ve been wondering ever since how best to honor that moving gesture. Today we are pleased to announce that as of 1AM (Central Daylight Time) April 1st, Google has officially changed our name to Topeka. 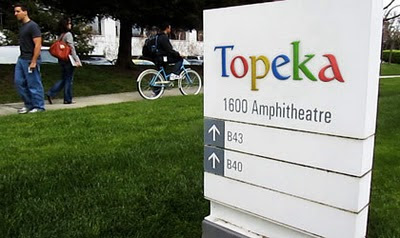 A change this dramatic won’t happen without consequences, perhaps even some disruptions. Here are a few of the thorny issues that we hope everyone in the broader Topeka community will bear in mind as we begin one of the most important transitions in our company’s history: