Was Humpty Dumpty An Egg?

By Unknown
February 21, 2010personals
I WAS BROWSING YAHOO! ANSWERS pages when I stumbled a question "Where in the nursery rhyme does it say humpty dumpty is an egg?" posted a couple of months ago by asker "I_is_a_patriot_1776". Curiousity got me searching for answers which I find interesting. 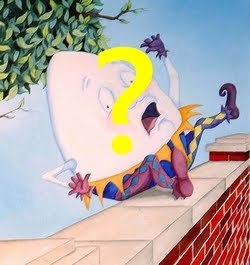 Wikipedia has several lyric / text versions. Indeed, these do not explicitly state that Humpty Dumpty was an egg.

A spoof for the Oxford Magazine in 1956:

There One-Eyed Thompson stood on the wall
A gunner of deadliest aim of all
From St. Mary's Tower his cannon he fired
Humpty-Dumpty was its name

There's a lot of speculations about who or what Humpty Dumpty is but here is the best answer from lpljr at Yahoo! Answers.

Humpty Dumpty was a slang in the eighteenth-century for short clumsy person. Humpty Dumpty was also the name of a canon in the sixteenth-century English civil war. He was mounted on a wall and was knocked down by enemy canon fire to the wall he was perched on. The king ordered him put back on the wall using men and horses but they failed to do so because Humpty was to enormous and heavy resulting in the king having to surrender and losing the war.