By Unknown
February 01, 2010bloggerbloggingNLE November 2009 Resultstech news
THE SURGE of internet traffic courtesy of users who were looking for the November 2009 Nurses Licensure Exam (NLE) results caused several websites and blogs to crash and become inaccessible.
Even the official website of the Professional Regulation Commission (PRC) who did not host the November 2009 NLE results was not able to escape the dilemma. For two days since Saturday when the rumor that the results would come out during the weekend began spreading like wildfire, it was hardly browsable.

The moment the results came out past 10 in the evening of Sunday, January 31st, when the websites and blogs began updating their posts on the November 2009 NLE results, users, mostly examinees, suddenly filled up a huge space of the world wide web. The websites whose web hosts could not cope up the required bandwidth already saw trouble.

The following image is proof how disastrous a very high internet traffic can affect a website with a low bandwidth allocation. 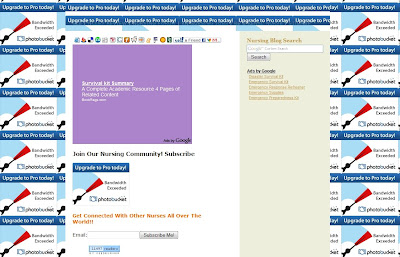 Since we are powered by Blogger, not a single glitch has come our way...as expected.