By Unknown
January 09, 2010internettwitterwebweb apps
Over capacity? Seldom it happens but I had a hard time logging in to my Twitter account this morning. Notice says there are too many tweets and 45 minutes passed before I was able to access Twitter sign in. 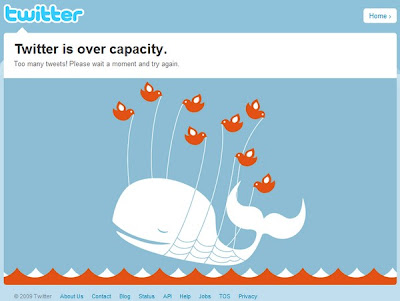 Was the actual number of Twitter users online when it happened enough to cause a Twitter outage or over capacity?

How many users does Twitter have? How many people use Twitter? Five (5), six (6), seven (7) million? I guess more than eight (8) million these days. That's just my estimate as the number of Twitter users is rapidly growing.

How about you? Got information on the actual number of people who use Twitter? Thanks for any feedback.