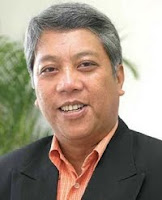 Remonde was found unconscious and "slumped inside the bathroom" of his home and was rushed to the Makati Medical Center where doctors failed to revive him, according to Executive Secretary Eduardo Ermita.

Remonde wasn't breathing and had no pulse and heart beat when he was brought into the emergency room, hospital spokesman Dr. Eric Nubla said. Attempts to resuscitate him failed.