By Unknown
January 23, 2010
MAYEN Austria, a die-hard fan, is rumored to be PBA superstar James Yap's girlfriend. It's a super hot topic in the showbiz world today. Kris Aquino, the wifey, had answered the issues hurled against her.

Actress and TV host Kris Aquino denied she shouted at the mother of Mayen Austria outside the residence of the Austrias in Valle Verde, Pasig City.

"In my 25 years of being in the public eye, nobody can ever say that it is in my nature na magmura or gumawa ng skandalo. I didn't shout or create a commotion," Kris said in a text message quoted on ABS-CBN's Entertainment Live.

Update: Mayen Austria's Facebook profile is active. You just have to be signed-in to add her (just in case).

"I JUST WANTED TO EXPRESS MY SINCEREST THANKS TO ALL MY FRIENDS AND FOLLOWERS WHO HAVE SHOWN THEIR LOVE & UNDERSTANDING DURING THIS TIME IN MY LIFE. I'D LIKE TO SHARE WITH ALL OF YOU THE MESSAGE I SENT TO TV PATROL & OTHER NEWS ORGANIZATIONS.

IN MY 25 YEARS OF BEING IN THE PUBLIC EYE, NOBODY CAN EVER SAY THAT IT IS IN MY NATURE NA NAGMURA OR GUMAWA NG ISKANDALO. I DIDN'T SHOUT OR CREATE A COMMOTION. THE MOTHER OF THE WOMAN CITED IN THE INQUIRER ARTICLE GRACIOUSLY CAME TO THEIR GATE & WE HAD A PEACEFUL CONVERSATION. I SIMPLY MADE MY DISCOMFORT KNOWN ABOUT HER DAUGHTER'S ACTUATIONS TOWARDS MY HUSBAND. MY FAMILY RECEIVED THE TEXT THAT MS. MAYEN AUSTRIA SENT AROUND. IN IT, SHE ADMITTED TO HAVING "CHEMICAL DEPRESSION AND COULD EASILY TAKE AN OVERDOSE OF PILLS.". MY BROTHER AND SISTERS ADVISED ME NOT TO SPEAK FURTHER ABOUT THE ISSUE BECAUSE IT WOULD NOT BE COMPASSIONATE TO DWELL FURTHER ON THE ISSUE BECAUSE OF MS. AUSTRIA'S MENTAL STATE."

"I WOULD JUST LIKE TO ADD THAT MY BROTHER NOY SHOULD NOT BE ATTACKED POLITICALLY BECAUSE OF A DOMESTIC ISSUE THAT HE ISN'T PART OF. MY BROTHER DURING AN INTIMATE EXCHANGE OF TEXTS ASSURED ME THAT MORE THAN HIS CAMPAIGN, MY WELFARE, THE SAFETY AND GOOD CONDITION OF MY SONS AND THE RESTORATION OF MY MARRIAGE IS WHAT'S MOST IMPORTANT TO HIM. HE REMINDED ME OF HIS FULFILLMENT OF HIS PROMISE TO MY MOM THAT HE WOULD TRY TO HELP ME STRENGTHEN MY MARRIAGE AND GIVE ME ADVICE AND SUPPORT.

"SO TO HIS ENEMIES - WAG NYONG GAMITIN ANG MARITAL ISSUE KO LABAN KAY NOY. HINDI SI NOY ANG MAY PROBLEMA SA ASAWA. NOY HAS ALWAYS BEEN AND WILL CONTINUE TO BE A PROTECTIVE BROTHER TO ME AND A LOVING UNCLE TO JOSH AND BABY JAMES."

More updates on this link

Here's a text message purportedly from Mayen Austria, which has been posted on blogs and showbiz related sites. I cannot confirm the veracity of this text message, which goes:

"To everyone. Kris Aquino passed by house to make me sugod. She spoke to my mom. Very mad, berating us saying i always text and call james. That my mom didn't bring me up right. That we shouldn't be talking to married men. She said she's leaving james and to know that i am the last straw and the reason for their break-up. My family has great respect for Teopacos who are our family friend.

Mrs. Teopaco is Cory's youngest sister. My mom raised us right. My mom didn't deserve all that. James missed called and texted na he warned me pupunta siya [Kris] sa house. He called me to apologize and say sorry. Kris said we had something going on. I don't deserve this. Most especially my mom. I have chemical depression and could have easily taken an overdose of p-ills because of the incident. With the hugs and love of my mom and sisters, and tranq-uilizers, i'm okay. Do you want Kris to be in malacanang."

It was Kris Aquino's interview today that took the whole time of showbiz talkshow "The Buzz" on ABS-CBN Kapamilya. Kris admitted that she is emotionally stressed on her relationship with James and that she needed space.

Kris also talked about Noynoy whose name was dragged into the issue. She defended her brother and explained that Noynoy has nothing to do with the circumstances. She further said that their detractors should stop using the controversy against Noynoy.

An anonymous commenter led us to a Multiply page purportedly belonging to Mayen Austria's sister.

[LINK TO PHOTO] Is the beautiful lady in the middle really Mayen Austria? Can someone reliable confirm?

The owner of the page, Tis Austria, calls her "sister" as Mia who "bakes personalized cakes and cupcakes". Hmmm... Mia could be Mayen's nickname. And the cupcakes might be a clue. What can you say?

If it's true that Mia is Mayen, then your Facebook search would lead you to Mia Austria Facebook profile.

Tis Austria's blog at Multiply, which purportedly showed the photos of Mayen or "Mia" Austria, has been deleted or removed.

If her Multiply blog wasn't removed, the photo would have looked similar to this sketch. 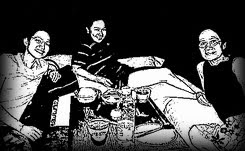 "Kinompromiso ko na si James, sweet na kami now," Kris, on The Buzz this Sunday, said. That's good. At least they are now back in each other's arms.

Any update on Mayen?

Kris says marriage is over. Click here for the latest update.

After days of silence regarding her marriage, actress-TV host Kris Aquino admitted she has given up on her marriage with basketball superstar James Yap. James Yap, who recently visited President-elect Aquino in his Times Street home, has yet to issue a statement regarding Kris Aquino’s latest revelation. - Source