By Unknown
July 06, 2009newsPhilippinespoliticspresident arroyo
The news that President Gloria Macapagal Arroyo had breast implants is all over television and radio stations as well as in the internet these days. 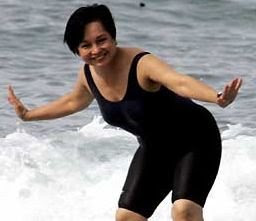 It was reported that the breast implant procedure done on President Gloria Macapagal-Arroyo back in the 1980s was a "medical necessity". Here's the full story.

MANILA, Philippines -- The breast implant procedure done on President Gloria Macapagal-Arroyo back in the 1980s was a "medical necessity" and was not spurred by vanity, her deputy spokeswoman, Lorelei Fajardo, said on Monday.

Fajardo, however, did not tell reporters why the chief executive needed breast augmentation.

But Fajardo said Arroyo was “offended” by talk about her breast implants.

“As a woman, President Arroyo was offended,” Fajardo said.

“A little delicadeza (sense of propriety) won’t hurt,” she said of discussions about the breast implants.

Relatively, the newsflash on TV shocked viewers when it revealed the National Bureau of Investigation's (NBI's) plan to crack down those responsible for the leakage of the story about Pres. GMA's breast implant in the 80's.

Personally, I don't think people should feast on this issue. And, oh well, it's worth pointing out that there's a lot of other important things our government should address. This present administration should focus more in finding long term solutions to the poverty problem, insufficiency in teachers and classrooms, issues of graft and corruption, and so on and so forth, rather than issuing rebuttals on this showbizzy stuff - it does not help our country at all.