The Agony of Waiting

By Unknown
July 24, 2009prctech news
This is commonly felt by aspirants who took the Nursing Board Examination last June 2009. Speculations, rumors and unsure pronouncements on the release date of the exam results have heightened the level of excitement, anxiety and mixed feelings of examinees.
Oftentimes in forum message boards or blog chat boxes, you will see people making inquiries on the date the exam results will be released. Someone will answer that it will be on July 25, others will respond that it will be published in the internet by noontime of July 26 and in national newspapers the day after.

Why are these 'speculations, rumors and unsure pronouncements' occur? It is because the Professional Regulation Commission (PRC) lacked the necessary information dissemination efforts on a large scale.

The 'agony of waiting' could not be felt if only...
The PRC website is down and inaccessible for more than a week now. We blogged about the possible Zero Day attack that hit the website but the PRC is silent on this. Google and web browser security programs classify the PRC website as an attack site that may harm computers.

Being one of the most accessed websites in the Philippines due to its nature, the PRC should tap competent IT people who can effectively and efficiently manage and maintain it.

The attack did not only happen once but on several occasions. Remember the April fool's day hack? Their IT department did not learn the lesson from that experience, don't you think so.

We hope that there will not be a time when hackers replace PRC's list of exam passers with fake ones. That would be scary! 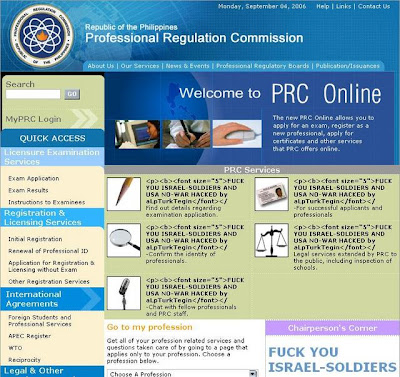