By Unknown
May 13, 2009applockermicrosoftwindows 7
One of the highlights in the TechEd 2009 in Los Angeles last May 11, 2009 was the revelation of Windows 7's new AppLocker feature. Mark Russinovich, Microsoft's Technical Fellow, demonstrated a feature Windows 7 RC downloaders had already received but may not have known they had.

The Windows 7 Applocker, which Russinovich calls "SRP or Software Restriction Policy" is a method using group policy to block specified software from running on client systems even after it's been upgraded or revised. When enabled in a network environment, by default, AppLocker disables any application from running that isn't recognized as part of Windows.

AppLocker is a flexible, easily administered mechanism that enables IT professionals to specify exactly what is allowed to run on user desktops. It provides the flexibility to allow users to run the applications, installation programs, and scripts they need to be productive. Learn how you can realize the security, operational, and compliance benefits of application standardization by using AppLocker. 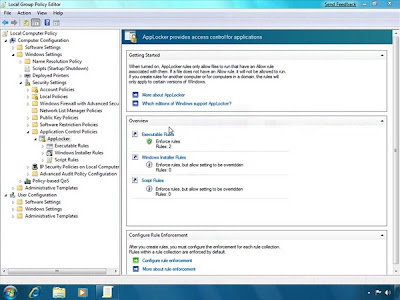 This is something that will recieve enthusiasm among Windows 7 RC 1 users. If you're curious enough, there is a video on the Applocker at work which is available on this page at the Microsoft Download Center.