How to Avoid or Remove Downandup or Conficker Worm Easily (updated) 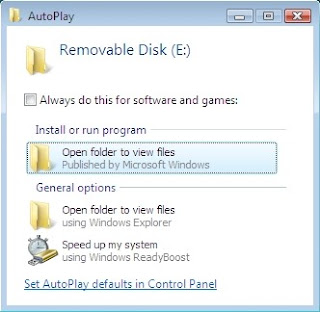 How does it work?

"By tricking you into running the virus by modifying the way "autorun" works when you plug in a drive. Look closely at the screenshot above and you'll see two entries for "Open folder to view files." The one at the top is a phony entry that actually installs the virus on your machine... but of course it's the default selection that pops up when you plug in a drive. Once installed, the virus spreads like crazy via a separate flaw in Windows networking system (now patched, so be sure to run Windows Update if you haven't lately) and can quickly infect a whole office" the report said.

There are three ways to avoid and remove this worm and these are as follows:

2. Download and install F-Secure's Removal Tool from here or here.

Have a safe and clean computer.