On their Firefox 2 download site, Mozilla posted this announcement:

Firefox 2.0.0.x will be maintained with security and stability updates until mid-December, 2008. All users are strongly encouraged to upgrade to Firefox 3.

Firefox 2.0.0.20 will be the last update. Somehow it is sad news to all users, me included, who have add-ons which are not compatible yet with version Firefox 3 installed. One of these is the Internet Download Manager (IDM) integration module. There is a workaround, however, which is to download with IDM in a manual way.
Here's how to update your Firefox 2.0.0.18 to version 2.0.0.20: 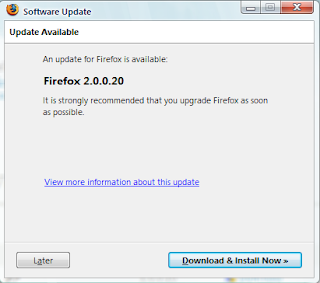 To update Firefox 3, go to this page and download the corresponding file for your operating system.

Firefox 3.0.5 has eight security updates and the following: