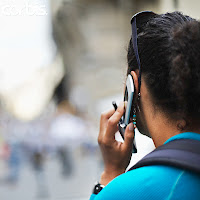 I was watching the news tonight and there was this report on Cell Phone Dermatitis. Here's what they say about it:

"In mobile phone dermatitis, the rash would typically occur on the cheek or ear, depending on where the metal part of the phone comes into contact with the skin. In theory it could even occur on the fingers if you spend a lot of time texting on metal menu buttons," said Dr. Graham Lowe, from the British Association of Dermatologists.

"It is worth doctors bearing this condition in mind if they see a patient with a rash on the cheek or ear that cannot otherwise be explained," he added in a statement.Source

It's kinda scary especially for those who use the cell phone most often; I don't but my boss does. Cell Phone Dermatitis may not cause death but the irritation will be annoying. Imagine, when you use the cell phone there's this itchy thing you feel in your cheek or ears during the call or thereafter.

Do you know what causes Cell Phone Dermatitis? Nickel, which, according to Wikipedia

Nickel is a metallic chemical element with the symbol Ni and atomic number 28. It is corrosion-resistant, finding many uses as in alloys and as a plating.

In January, Lionel Bercovitch of Brown University in Providence, R.I., and his colleagues tested 22 popular handsets from eight different manufacturers and found nickel in 10 of the devices.

"Given the widespread use of cellphones, the presence of metal in the exterior casing of these phones and the high prevalence of nickel sensitization in the population, it is not surprising that cellphones can cause allergic contact dermatitis," Bercovitch said.

Menu buttons, decorative logos on headsets and the metallic frames around a phone's screen were the most common places where nickel was found.

"Those with the more fashionable designs often have metallic accents and are more likely to contain free nickel in their casings," Bercovitch added.

Do you think we go back to the basics, use more plastic... or wood maybe? LOL. What do you think?