By Unknown
September 21, 2008broadbandcable internetcablenutcomputerdesktopinstallationspeedtcpiptcpip resetter
A friend of mine visited yesterday and brought with her a couple of desktop computers.

She told me she wasn't able to make use of these units the whole week. Her internet shop business was greatly affected.
During our conversation, she revealed that their technician/assistant used two TCP/IP tweaking softwares at the same time. He had both TCP Optimizer and Cablenut installed altogether on these machines due to her desire of improving the internet connection speed, to no avail. Instead, the speed became intermittent and eventually crashed.
I already knew the problem upon hearing her story. The technician messed up tcpip settings - one of these is the TCP Received Window (RWin).

In order to fix the problem, I ran two softwares. First, the TCP/IP Resetter and second is DrTCP.

In less than an hour, we were able to fix the issue. Now it's business as usual for my friend. 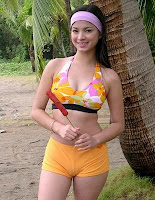 She is not Angel...but she's as pretty.